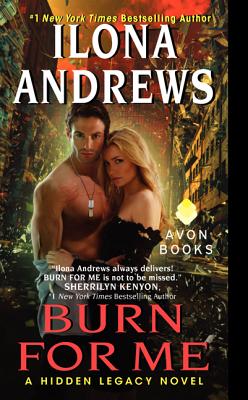 Avon 10/28/2014. New paperback. Store pick: Fans of Laurell K. Hamilton, Patricia Briggs, and Charlaine Harris will love Burn for Me, the first book in a new paranormal series by Ilona Andrews. Private eye Nevada Baylor is being blackmailed into a suicide mission to bring in a rogue Prime (the highest rank of magic user) who can set anything and everyone on fire. Prime Connor Rogan is also after the same target and they end up joining forces. Connor is the epitome of alpha male -- he's ex-military with powers that can level entire buildings -- but Nevada is no pushover and she's got her entire family to protect. I simply cannot wait for the next book in this series! -Jill Hendrix, store owner

#1 New York Times bestselling author Ilona Andrews launches a brand-new Hidden Legacy series, in which one woman must place her trust in a seductive, dangerous man who sets off an even more dangerous desire . . .

Nevada Baylor is faced with the most challenging case of her detective career--a suicide mission to bring in a suspect in a volatile situation. Nevada isn't sure she has the chops. Her quarry is a Prime, the highest rank of magic user, who can set anyone and anything on fire.

Then she's kidnapped by Connor "Mad" Rogan--a darkly tempting billionaire with equally devastating powers. Torn between wanting to run and wanting to surrender to their overwhelming attraction, Nevada must join forces with Rogan to stay alive.

Rogan's after the same target, so he needs Nevada. But she's getting under his skin, making him care about someone other than himself for a change. And, as Rogan has learned, love can be as perilous as death, especially in the magic world.

Title: BURN FOR ME (HIDDEN LEGACY, NO 1)