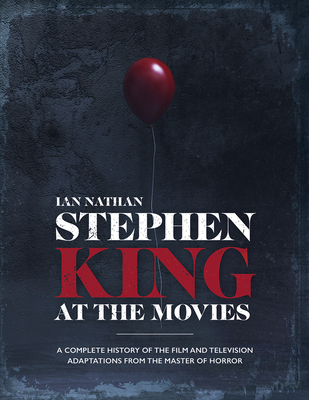 STEPHEN KING AT THE MOVIES: A COMPLETE HISTORY OF THE FILM AND TELEVISION ADAPTATIONS FROM THE MASTE

Surely America's greatest storyteller, no single author has been adapted more regularly than Stephen King. With 65 existing movies and 30 television shows, and many more to come, the concept of the King adaptation lies at the core of what we understand as Hollywood entertainment, the essence of horror, and the landscape of American life. Illustrated with a fabulous array of familiar and unusual iconography, this is the most comprehensive account of the films and television series adapted from the work of Stephen King ever put together. Every Children of the Corn movie has been accounted for; every remake and reboot wrestled into submission; all the dark recesses of King's imagination brought out into the light. Including fresh critical analysis, interviews, behind-the-scenes revelations and biographical detail, this is both a King completist's dream and a must for all movie fans. Here is the chance to delve deep into such terrifying and beloved movies and TV shows as Carrie, Salem's Lot, The Shining, Cujo, Stand By Me, Misery, The Shawshank Redemption, The Green Mile, and such modern marvels as Castle Rock, Mr. Mercedes, Pet Sematary, It: Chapters One and Two, and Doctor Sleep.

Title: STEPHEN KING AT THE MOVIES: A COMPLETE HISTORY OF THE FILM AND TELEVISION ADAPTATIONS FROM THE MASTE

STEPHEN KING AT THE MOVIES: A COMPLETE HISTORY OF THE FILM AND TELEVISION ADAPTATIONS FROM THE MASTE