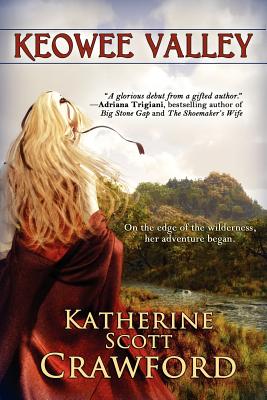 "Keowee Valley is a terrific first novel by Katherine Scott Crawford-a name that should be remembered. She has a lovely prose style, a great sense of both humor and history, and she tells about a time in South Carolina that I never even imagined." -Pat Conroy, bestselling author of The Prince of Tides and South of Broad.
She journeyed into the wilderness to find a kidnapped relative. She stayed to build a new life filled with adventure, danger, and passion.
Spring, 1768. The Southern frontier is a treacherous wilderness inhabited by the powerful Cherokee people. In Charlestown, South Carolina, twenty-five-year-old Quincy MacFadden receives news from beyond the grave: her cousin, a man she'd believed long dead, is alive-held captive by the Shawnee Indians. Unmarried, bookish, and plagued by visions of the future, Quinn is a woman out of place . . . and this is the opportunity for which she's been longing.
Determined to save two lives, her cousin's and her own, Quinn travels the rugged Cherokee Path into the South Carolina Blue Ridge. But in order to rescue her cousin, Quinn must trust an enigmatic half-Cherokee tracker whose loyalties may lie elsewhere. As translator to the British army, Jack Wolf walks a perilous line between a King he hates and a homeland he loves.
When Jack is ordered to negotiate for Indian loyalty in the Revolution to come, the pair must decide: obey the Crown, or commit treason . . .
Katherine Scott Crawford was born and raised in the blue hills of the South Carolina Upcountry, the history and setting of which inspired Keowee Valley. Winner of a North Carolina Arts Award, she is a former newspaper reporter and outdoor educator, a college English teacher, and an avid hiker. She lives with her family in the mountains of Western North Carolina, where she tries to resist the siren call of her passport as she works on her next novel. Visit her at: www.katherinescottcrawford.com.