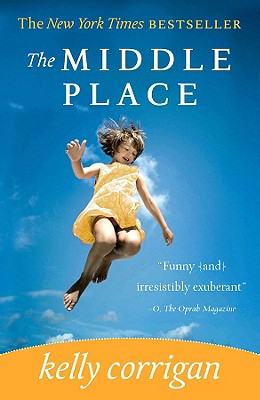 Hyperion 12/23/2008. New paperback. Store pick, recommended by Jill: I highly recommend The Middle Place as a selection for your reading group or for any 30-something woman who has ever found that even 'after all the paperwork — a marriage license, a notarized deed, two birth certificates, and seven years of tax returns — clearly indicates that you’re an adult, but all the same, there you are, clutching the phone and thanking God that you’re still somebody’s daughter.' -Jill Hendrix, store owner

"An amazing story told with steep honesty. The Middle Place is memoir at its highest form."

--Darin Strauss, author of More Than It Hurts You and The Real McCoy

"If you're in a book club or just love to read, make sure this book ends up in your lap, where it will remain until you finish. Plan to laugh, cry, and be consumed by Kelly Corrigan."
--Winston-Salem Journal

"Bravely reveals the frightened daughter inside the grown-up wife and mother."
--Elle

"Come for the writing, stay for the drama. Or vice-versa. Either way, you won't regret it."

For Kelly Corrigan, family is everything. At thirty-six, she had a marriage that worked, two funny, active kids, and a weekly newspaper column. But even as a thriving adult, Kelly still saw herself as the daughter of garrulous Irish-American charmer George Corrigan. She was living deep within what she calls the Middle Place--"that sliver of time when parenthood and childhood overlap"--comfortably wedged between her adult duties and her parents' care. But Kelly is abruptly shoved into coming-of-age when she finds a lump in her breast--and gets the diagnosis no one wants to hear. When George, too, learns that he has late-stage cancer, it is Kelly's turn to take care of the man who had always taken care of her--and to show us a woman who finally takes the leap and grows up.