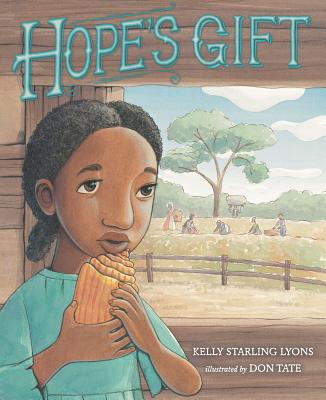 A poignant story celebrating the 150th anniversary of the Emancipation Proclamation

It's 1862 and the Civil War has turned out to be a long, deadly conflict. Hope's father can't stand the waiting a minute longer and decides to join the Union army to fight for freedom. He slips away one tearful night, leaving Hope, who knows she may never see her father again, with only a conch shell for comfort. Its sound, Papa says, echoes the promised song of freedom. It's a long wait for freedom and on the nights when the cannons roar, Papa seems farther away than ever. But then Lincoln finally does it: on January 1, 1863, he issues the Emancipation Proclamation, freeing the slaves, and a joyful Hope finally spies the outline of a familiar man standing on the horizon.

Affectingly written and gorgeously illustrated, Hope's Gift captures a significant moment in American history with deep emotion and a lot of charm.