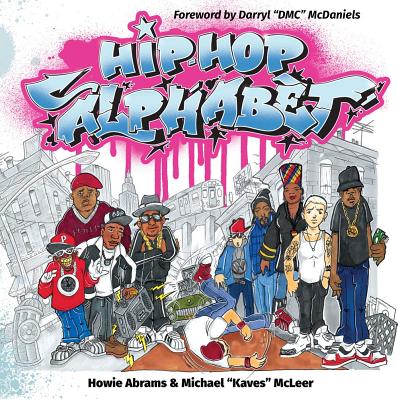 Take a wondrous alphabetical journey through the glorious history of hip-hop in this kid-friendly introduction to the music that defined a generation. Featuring clever rhymes and graffiti-style drawings by legendary artist Kaves, Hip-Hop Alphabet uses the twenty-six letters of the alphabet to educate kids about classic icons (LL Cool J, the Beastie Boys, and Jay-Z), as well as essential elements of the music and culture (DJs, microphones, and vinyl). Learn the ABCs with a beat

Howie Abrams is a former music business executive turned author. He co-authored Finding Joseph I: An Oral History of H.R. from Bad Brains and The Merciless Book of Metal Lists. He co-hosts a weekly radio show called Merciless with rapper Ill Bill.

Michael "Kaves" McLeer is a legendary graffiti artist and the author of Skin Graf: Masters of Graffiti Tattoo. He has created logos and graphics for world renowned artists such as the Beastie Boys and Metallica. He is an MC in the hip-hop/rock group Lordz of Brooklyn.

Darryl "DMC" McDaniels is one of the founders of the groundbreaking rap group Run-DMC, which has sold more than 30 million singles and albums worldwide. He is the author of King of Rock.