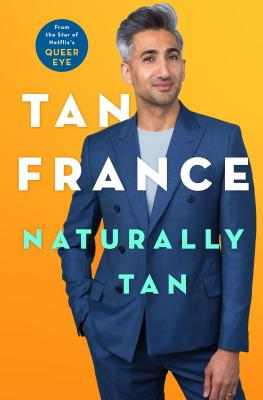 ?In this heartfelt, funny, and touching memoir, one of the stars of Netflix's Emmy Award-winning smash-hit Queer Eye reveals how an Englishman raised in a traditionally religious home became a fashion icon--and the first openly gay, South Asian man on television--simply by being Naturally Tan.

Before he became famous as one of the Fab Five makeover experts, Tan France was the youngest child in his family, growing up in South Yorkshire, England. As a member of one of the very few South Asian, Muslim families living in the predominantly white community, he was routinely bullied for both his culture and his skin color.

Knowing he was gay from an early age, Tan harbored that secret to avoid further racial harassment and potentially cause a rift between him and his family. It was a secret he would keep from them until finally coming out at the age of 34--happily married to Rob, a Mormon cowboy from Salt Lake City.

With his trademark wit, humor, and radical compassion, Tan shares his journey and the lessons he's learned along the way about being a successful businessman, a devoted spouse, and self-acceptance. From navigating the gay community, to finding the love of his life, to creating a popular ladies' clothing lines for Kingdom & State and Rachel Parcell, Inc. to joining Antoni Porowski, Karamo Brown, Bobby Berk, and Jonathan Van Ness on Queer Eye as positive, representative celebrity role models for LGBTQ people, Tan followed his own path to develop his signature style and embrace life on his own terms.

Full of his candid observations about US and UK cultural differences, social media behavior, celebrity encounters, behind-the-scenes realities of reality TV, and--of course--fashion tips, Tan gives his unique perspective on the happiness to be found in being yourself.