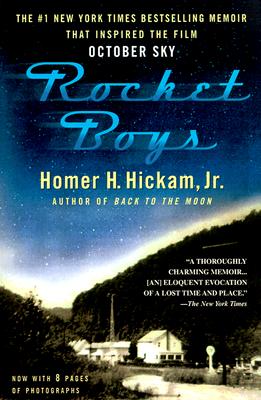 The #1 New York Times bestselling memoir that inspired the film October Sky, Rocket Boys is a uniquely American memoir--a powerful, luminous story of coming of age at the dawn of the 1960s, of a mother's love and a father's fears, of a group of young men who dreamed of launching rockets into outer space . . . and who made those dreams come true.

With the grace of a natural storyteller, NASA engineer Homer Hickam paints a warm, vivid portrait of the harsh West Virginia mining town of his youth, evoking a time of innocence and promise, when anything was possible, even in a company town that swallowed its men alive. A story of romance and loss, of growing up and getting out, Homer Hickam's lush, lyrical memoir is a chronicle of triumph--at once exquisitely written and marvelously entertaining. Now with 8 pages of photographs. A number-one New York Times bestseller in mass market, brought to the screen in the acclaimed film October Sky, Homer Hickam's memoir, nominated for the National Book Critics Circle Award, comes to trade paperback with an all-new photo insert. One of the most beloved bestsellers in recent years, Rocket Boys is a uniquely American memoir. A powerful, luminous story of coming of age at the end of the 1950s, it is the story of a mother's love and a father's fears, of growing up and getting out. With the grace of a natural storyteller, Homer Hickam looks back after a distinguished NASA career to tell his own true story of growing up in a dying coal town and of how, against the odds, he made his dreams of launching rockets into outer space come true. A story of romance and loss and a keen portrait of life at an extraordinary point in American history, Rocket Boys is a chronicle of triumph.