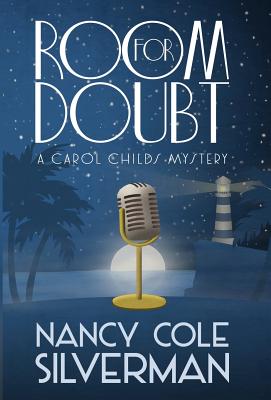 ROOM FOR DOUBT (CAROL CHILDS, NO 4)

"Grips a reader from the first page, offering an addictive mix of wit and suspense. Silverman is a master at crafting ripped-from-the-headlines storylines that feature a smart, appealing protagonist. Room for Doubt leaves no doubt this is one of the strongest contemporary mystery series out there." - Ellen Byron, Award-Winning Author of Body on the Bayou

When radio reporter Carol Childs is called to a crime scene in the Hollywood Hills at five thirty in the morning, she's convinced it must be a publicity stunt to promote a new movie. That is, until she sees the body hanging from the center of the Hollywood sign. The police are quick to rule it a suicide, but something doesn't add up for Carol. Particularly after a mysterious caller named Mustang Sally confesses to the murder on the air and threatens to kill again.

With the help of an incorrigible PI, her best friend, and a kooky psychic, Carol is drawn into the world of contract killers and women scorned. As she races to find the real killer, she finds herself faced with a decision that will challenge everything she thought she knew.

"In Room for Doubt, a page-turning cozy with a dollop of noir, investigative reporter Carol Childs goes undercover to infiltrate a secret society that's meeting out savage justice for scorned women. At the same time, Childs navigates the behind-the-scenes minefield of a radio news station, a world which the author knows firsthand, and a new relationship with an unconventionally sexy PI, who further complicates Childs' personal life. With a carload of quirky characters and a Los Angeles setting that comes alive, there's no doubt Nancy Cole Silverman has penned another winner." - Dianne Emley, L.A. Times Bestselling Author of the Nan Vining Series

Part of the Henery Press Mystery Series Collection, if you like one, you'll probably like them all.

Author Bio: Nancy Cole Silverman credits her twenty-five years in news and talk radio for helping her to develop an ear for storytelling. But it wasn't until after she retired that she was able to write fiction full-time. Much of what Silverman writes about is pulled from events that were reported on from inside some of Los Angeles' busiest newsrooms where she spent the bulk of her career. She lives in Los Angeles with her husband, Bruce, and two standard poodles.

ROOM FOR DOUBT (CAROL CHILDS, NO 4)