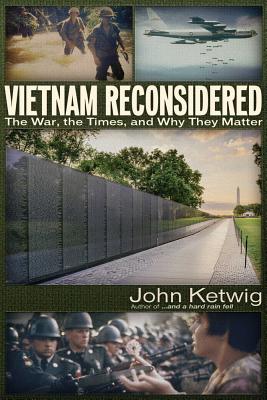 VIETNAM RECONSIDERED: THE WAR, THE TIMES, AND WHY THEY MATTER

Very few of the many books about the Vietnam War fully address why the fighting was conducted in such a cruel manner, why it was prolonged far past its logical end, or what, ultimately, went wrong. American literature has been reluctant to emphasize the fact that between 3.5 and 5 million Southeast Asians died--many of them peasants--that the majority of the bombs dropped from American planes landed on South Vietnam--our ally and an impoverished agricultural society--or that the use of napalm and Agent Orange was, in reality, chemical warfare. Americans have been reluctant to acknowledge the damage done, but after 17 years of another, very similar conflict in Afghanistan, many Americans are beginning to wonder why our highly financed and supported military isn't more effective. This book strongly suggests that the lessons of Vietnam are relevant and worthy of being reconsidered as today's wars are debated. From Captain Kangaroo, Roy Rogers, and Walt Disney to space travel, muscle cars, and The Beatles, the generation that would be sent to fight in Vietnam was uniquely influenced by times that were a-changin'. Like square pegs in a round hole, the post-World War II baby boomers were brought up with values that made widespread social outcry against the horrors of the war predictable and necessary. Those influences and values have long been ignored, but this book revives a spirited discussion and analysis of the first war America lost.

Title: VIETNAM RECONSIDERED: THE WAR, THE TIMES, AND WHY THEY MATTER

VIETNAM RECONSIDERED: THE WAR, THE TIMES, AND WHY THEY MATTER