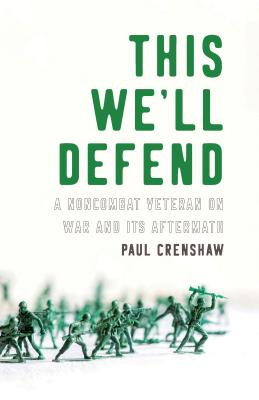 THIS WE'LL DEFEND: A NONCOMBAT VETERAN ON WAR AND ITS AFTERMATH

In June of 1990, Paul Crenshaw shipped out to Fort Sill, Oklahoma, for basic training for the National Guard. By August the world was preparing for war. Saddam Hussein had invaded Kuwait, and each day brought more news of mobilizing forces. For weeks Crenshaw was told he was going to war, but after graduation he went back home to Arkansas and watched CNN every night, lying about how much he wished he were there.

Crenshaw served six years, from 1989 to 1995, in an air defense artillery unit of the Arkansas National Guard. He saw his stepfather's unit activated for Desert Storm and saw his own unit activated to save Arkansas chickens. Later, after he had gotten out of the army, he began to question the reasons for the wars we fight. The essays here follow his time in the service, from Basic Training to weekend National Guard drills, and the years after. Crenshaw moves from eager recruit to father worrying about whether his daughters might enlist. He sees the airplanes striking the Twin Towers and watches two more wars ignite out of the ashes of the old. He writes as a soldier who didn't see combat but who wonders what the constant combat U.S. soldiers face might do to them, how it affects them, and how the wars we fight affect us all. With sometimes lyrical and sometimes harsh prose, these essays reflect deeply on American culture and military life: How easily we buy into ideas of good versus bad, us versus them. How we see soldiers as heroes when more often than not they are young boys who are barely old enough to shave. How they return home broken, and we only wave our flags instead of trying to fix them and the ideas that sent them to war.

Title: THIS WE'LL DEFEND: A NONCOMBAT VETERAN ON WAR AND ITS AFTERMATH

THIS WE'LL DEFEND: A NONCOMBAT VETERAN ON WAR AND ITS AFTERMATH