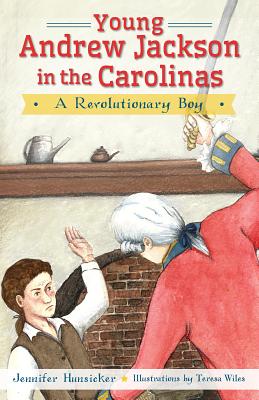 YOUNG ANDREW JACKSON IN THE CAROLINAS: A REVOLUTIONARY BOY

Before he was Old Hickory" and the "People's President," Andrew Jackson came of age in the Waxhaw region of the Carolinas during the turmoil of the Revolutionary War. Young Andy Jackson faced uncommon challenges as a child that would shape his historic life. He lost his mother and two brothers to the savages of war. At age thirteen, Jackson served as a messenger, fighting for independence, in his local Scotch-Irish militia and lived through the region's toughest Revolutionary battles happening all around him. Eventually captured, he became a prisoner of war, something that would cost him dearly. Additionally, when he refused to clean the boots of a British officer, he was slashed with a sword. He carried those scars the rest of his life. Join author Jennifer Hunsicker as she recounts these exciting stories and more, giving young readers an adventurous tale of a uniquely American childhood."

Title: YOUNG ANDREW JACKSON IN THE CAROLINAS: A REVOLUTIONARY BOY

YOUNG ANDREW JACKSON IN THE CAROLINAS: A REVOLUTIONARY BOY